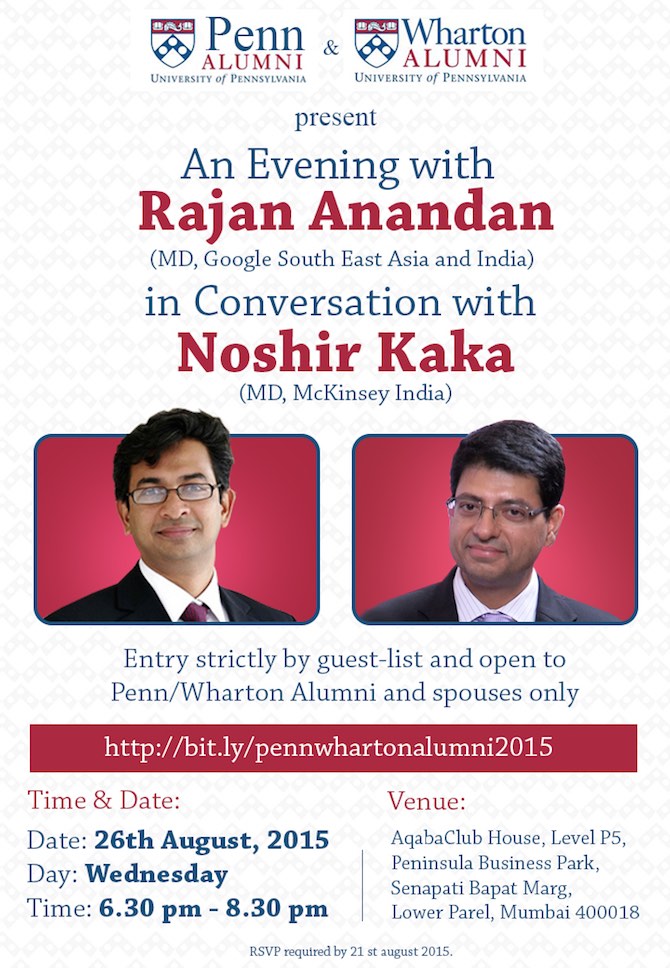 The Penn Club of Mumbai and the Wharton Club of India would like to invite you to an evening with Rajan Anandan in conversation with Noshir Kaka. Rajan and Noshir will  discuss the future of the Internet and technology in India as it relates to our lives and the evolving business landscape around us.

Rajan Anandan is the Vice President and Managing Director of Google South East Asia and India. Rajan is focused on expanding the Internet ecosystem in the region, increasing adoption among consumers and businesses and accelerating innovation. Prior to Google, Rajan was the Managing Director of Microsoft India and built India's largest software business. Before joining Microsoft, he was a Vice President with Dell where he held several global leadership roles including that of the Executive Assistant to Chairman Michael Dell. Before Dell, Rajan was a Partner with McKinsey & Company in Chicago. He holds an MSc from Stanford University and a BSc from MIT. Here is a brief glimpse of Rajan on youtube.

Noshir Kaka is the Managing Director of McKinsey India. He has led McKinsey’s global knowledge initiative on executing Outsourcing and Offshoring and the 2nd, 3rd and 4th McKinsey-Nasscom reports on understanding current trends and outlining future initiatives for the IT and BPO sectors in India. He was actively involved in the creation of the Indian School of Business, which is a joint initiative between McKinsey, Wharton, LBS and Kellogg to build a world-class  business school in India.

Registration is on a first come first basis. Please RSVP on this link http://bit.ly/pennwhartonalumni2015