Dream With Your Eyes Open: A Session on Entrepreneurship with Ronnie Screwvala 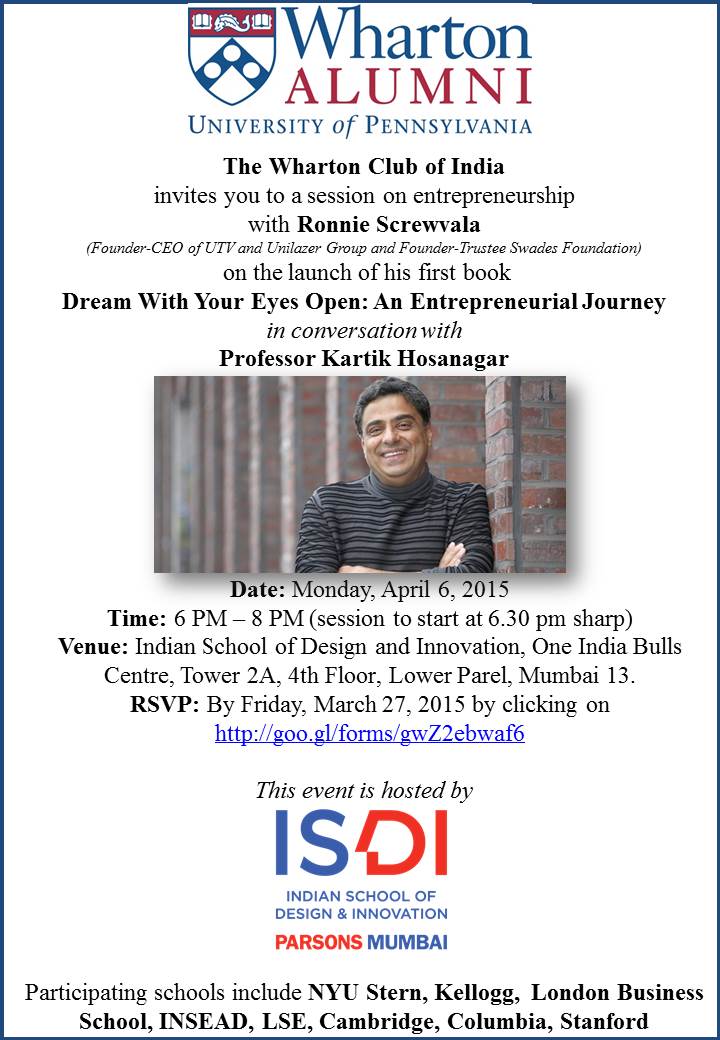 on the launch of his first book
Dream With Your Eyes Open: An Entrepreneurial Journey

in conversation with
Professor Kartik Hosanagar

------------------------------------------
Ronnie Screwvala is a first generation entrepreneur who pioneered Cable TV in India, built one of the largest toothbrush manufacturing operations and went on to create a Media & Entertainment conglomerate – UTV – spanning Television, Broadcasting, Digital, Mobile and Motion Pictures, which he divested to The Walt Disney Company in 2012
Demonstrating an innate ability to merge creativity with commerce, Newsweek termed him the Jack Warner of India, Esquire rated him one of the 75 most influential people of the 21st Century and Fortune as Asia’s 25 most powerful.
Onto his second innings, Ronnie is driven by his interest in championing Entrepreneurship in India and is also focused through Unilazer to build his next set of ground up businesses in high growth and impact sectors. His more recent commitment is also to build Sports with lending first mover and support to Kabaddi and Football.
Ronnie is also passionate about Social Welfare and is active along with his wife Zarina as Founder Trustees of The Swades Foundation, which operates with the single minded focus of empowering one million lives in Rural India every 5-6 years through a unique 360 degree model with verticals in Water, Sanitation, Health, Nutrition, Community Mobilization, Education, and most importantly Agriculture & Livelihood, to lift them out of poverty permanently.

Kartik Hosanagar is a Professor of Internet Commerce at The Wharton School of the University of Pennsylvania. Kartik's research work focuses on the digital economy, in particular Internet media, Internet marketing and e-commerce. Kartik has been recognized as one of the world's top 40 business professors under 40. He has received several teaching awards including the MBA and Undergraduate Excellence in Teaching awards at the Wharton School. Kartik is a cofounder of Yodle Inc, a venture-backed firm that has been listed among the top 50 fastest growing private firms in the US. He has served on the advisory board of Milo Inc (acq by eBay) and is involved with other startups as either an investor or board member. His past consulting and executive education clients include Google, Nokia, American Express, Citi and others. Kartik graduated at the top of his class with a Bachelors degree in Electronics and a Masters in Information Systems from Birla Institute of Technology and Sciences (BITS, Pilani), India, and he has an MPhil in Management Science and a PhD in Management Science and Information Systems from Carnegie Mellon University.